The Real Bio: A Photo Essay

My twelve-year-old, Max, describes me as "a gently simmering volcano: powerful yet beautiful in her own way. Also fiery." I'm just glad he didn't say I attract murderers of virgins/political enemies or smell like hydrogen sulfide so bad it affects your voice and eyesight (Masaya Volcano in Nicaragua does, true story). But I do glow best at night: I'm not a morning person, even after six weeks of going to the gym every day at 5 a.m. Twenty-one days to form a new habit, my ash.

If I had to describe myself in one (grammatically correct but punctuation-cheating, syntax-sneaky) sentence, it would be this one:

Coffee in a large mug brings me deep daily joy; the more I study the math and physics of our (miraculous vast curved old dark Big-Banged energy-filled purpose-silent) universe, the happier I am; I own every book written by Mary Roach; MacGyver's mullet is my spirit animal; higher education is plagued with boring textbooks and poorly paid adjunct professors, and this will come back to bite us if we don't change; I belong to the A+ lending team on Kiva.org, a smart nonprofit group; there is stability in accepting instability, order in chaos; I don't believe I'm an INTJ in the Myers–Briggs system, but I'm told that's exactly what an INTJ would say; my zodiac sign is the exasperated look of astronomy teachers everywhere when they try their best to explain that all horoscopes (except these ones from Weird Al) are GARBAGE and that the thirteen incredibly arbitrary Western constellations currently populating the zodiac belt in our current sky do NOT currently match the twelve incredibly arbitrary Western constellations anciently believed by ancient folks to be prophetic based on their ancient Earth-as-Center-of-Universe skyview that no longer appears above us because of axial precession—how the Earth wobbles slowly like a top, at an angle, which has caused as many as twenty-five incredibly arbitrary Western constellations to appear on the Sun–Earth plane ("the ecliptic" or "the zodiac belt") ever since humans started gazing up from the wobbly Earth and finding changeable patterns among the stars . . . but trust me, it is utterly pointless to argue with and rail at astrologers, psychics, conspiracy theorists, political extremists, and Mormon missionaries, the last of which I was myself, once upon a time, so all you can do is diplomatically provide the most accurate information possible, love people as they are, and find other common ground underneath the sky we share. 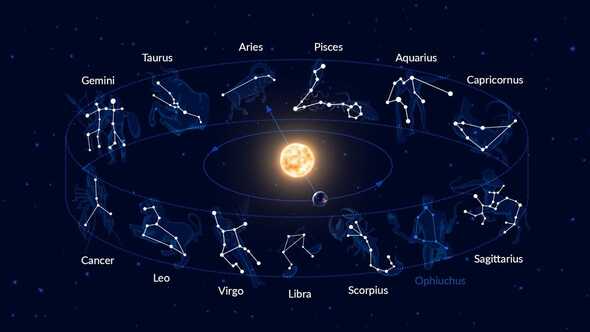 Image of thirteen constellations in the zodiac belt, from this great StarWalk article: https://starwalk.space/en/news/zodiac-constellations. Aries is your zodiac sign when the Sun is "in" Aries, as shown by the arrow drawn through the Sun. While the Sun (now) lines up with 13 constellations as Earth moves around the Sun, the same is not true for planets, which can line up with as many as 25 constellations throughout the year. Venus is the only planet that passes through all 25.
I highly recommend StarWalk's app, the best astronomy app I've found and used with my astronomy students.
​Ten rare Z Points will be awarded to the first student who correctly diagrams that last massive paragraph-sentence. If you do not know how to diagram sentences, I will gladly teach you, and I'll throw in some Feynman diagrams while we're at it, for fun. I will teach you of heaven and earth, pen and sword, particle and wave, gin and tonic.

I love personal essays and particle physics specifically, great writing and science generally, and my work often sits semaphorically at these crossroads. I see broken syntax and systems in my dreams and see ways to fix them in real life. I am particular, meaning I've been trained to spot every errant comma in writing, every colon in a Python program, every crumb of bread left on the kitchen counter. But I've also learned to be flexible, forgiving, and empathetic after being married for fifteen years to a hot, brilliant US diplomat who has the patience of a god, who takes me to see new things in new lands, and who is completely blind to bread crumbs. 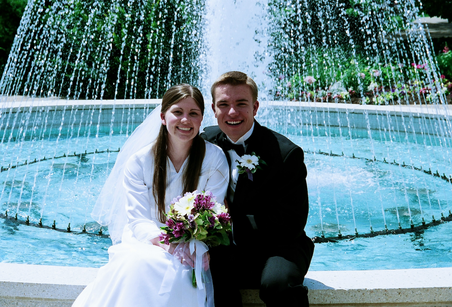 I love pedagogy, the science and art of teaching. Creating and teaching Subatomic Writing and Funny Side of Science for Johns Hopkins continues to be delightful, but I've also taught science/medical writing workshops, personal essay and memoir courses, literature courses, editing courses, short story courses, and high school and college astronomy courses. I've taught preschoolers to PhDs, babies to folks in their eighties. I believe that where much is given, much is required; I work hard to pass on the best of what my great teachers gave to me.

​My science-writing students at JHU know I expect a lot of them but I'm fun, you know, like Richard Feynman—not as knowledgeable as Feynman, surely, but I'm way less sexist, can we be honest for a moment? As a bonus, I've never choked my spouse, as Feynman's second ex-wife claimed he did. I teach inclusive science and inclusive writing, and I refuse to subtly shame students by wielding words like "clearly," "simply," and "obviously" (this is called Proof by Intimidation, and it is not teaching). I do my best to practice what I preach, an apt cliché given that my undergrad career counselor at Brigham Young University gave me a career test decreeing I should make money as a professional preacher (this is, in retrospect, hilarious coming from a patriarchy that condemns priests for priestcraft—making money from their words—and condemns priestesses entirely). All prophecies I make, in writing or science, are founded on acute observation and statistically significant data, to the best of my mortal, peculiarly particular ability, and I call my prophecies theses or hypotheses. You can have them too. It's not an exclusive club.
In ancient Greece, being a high priestess—with the title Pythia, the Pythoness—at the temple in Delphi was considered an honorable career. Pythia, chosen for her good character and way with words, would descend into a chasm under the temple; perched upon a gilded tripod over a crack in the earth, she'd get drunk on the vapors rising around her, and she uttered truth and prophecies in dactylic hexameter, which were written down and distributed. Beneath her, deep in the smoking earth, Gaia's monster-child Python guarded the center of the world until Apollo, god of light and poetry, slew it, took over the temple, and made his sunlight burn off the fog. I, she-volcano that I am, harbor thoughts that are more like the ancient monster Hydra: lop one off and two-plus grow in its place. I tame monster thoughts not by cauterizing them with sunlight but by allowing them free expression—and then I temper them with best editing practices I also pass on to my students, which I learned from Brigham Young University's kickass undergraduate editing program.
Finally, other interests: I learned Gregg shorthand as a preteen, I tutored Latin in college, I've danced the Viennese Waltz in a palace in Vienna, I can say "Look at that fat white baby" in Marshallese, I'm almost a black belt in Jissen Kobudo Jinenkan, my Z-serve in racquetball is evil, and Brooklyn Nine-Nine makes me laugh so hard that I forgive the world for being so dark and cruel. I think humor is a great way to learn anything, a tool I exploit in my classes and in long website bios.

I am a child of Tetris, Minesweeper, and Zork, which says more about me than any zodiac sign ever could.
P.S. Yes, the demon in Subatomic Writing was born during my ninth-grade biology class. You'll have to read the Epilogue of the book, however, to get the full story there. If you buy the book, convince your professor friends to adopt it as a textbook for their science or writing classes, or throw gobs of money at me for no other reason than you appreciated this honest bio, you'll help me work toward my ultimate physics + writing dream: for humans to be smarter, kinder, and happier through better communication and a more accurate understanding of our universe. Come wrestle demons and get drunk on science and language vapors with me!

I currently research cosmic rays for the Telescope Array Project at the University of Utah and teach science writing in the MA Science Writing Program at Johns Hopkins University. In May 2022, I started my master's degree in Applied Physics with the Whiting School of Engineering at JHU. To pay for it, I teach private writing lessons. Subatomic Writing: Six Fundamental Lessons to Make Language Matter from Johns Hopkins University Press will be published February 21, 2023. Blurbs and trailers here: www.subatomicwriting.com. I have a monthly newspaper column, Citizen Science, in the central New York newspapers The Freeman's Journal and Hometown Oneonta.

Previously, I was a science editor for a decade, acting as managing editor for the Brussels-based NGO Atomium Culture and as a proofreader of graduate textbooks on engineering, computer programming, optics, mathematics, statistics, and astrophysics for CRC Press (now Routledge), a member of the Taylor & Francis Group. I earned my Master of Fine Arts in Writing & Literature from Bennington College in 2015.

From 2016 to 2018, I taught astronomy at the Pierre and Marie Curie School and the American University of Managua in Nicaragua. I have lived in Utah, Toronto, Italy, Belgium, New York, DC, the Marshall Islands, Montreal, and Nicaragua as part of a Foreign Service family. I was forced to evacuate Nicaragua with my son on account of political violence caused by dictator Daniel Ortega, who hurt my students and their families. I'm incredibly grateful for my friends, family, colleagues, and students, both overseas and local.

Max, Andrew, I will be moving to Frankfurt, Germany, in June 2023, so if you live in the United States and would like me to speak at your science, writing, or science writing event, let's talk sooner rather than later. I enjoy speaking and connecting with people, motivating them and making them laugh.
​ 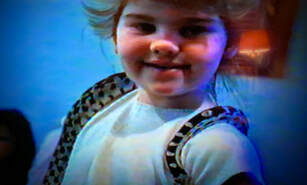 Because I was born between November 30 and December 17, my zodiac sign—if you are hell-bent on dividing all human personalities into thirteen equal groups based on incredibly arbitrary Western constellations—really and truly is Ophiuchus, that thirteenth constellation in our current sky. It is pronounced "Oh, few cuss."

​Ancient Greeks saw Ophiuchus as Apollo wrestling Python outside Pythia's temple. Others associate Ophiuchus with the son of Apollo and Coronis—Asclepius—who became a healer: snakes have long been associated with healing, birth, and rebirth as they shed their skins and keep growing.